Is Your Eating Gay Or Straight? 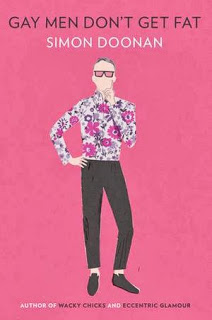 I am normally quite critical of those without nutrition training writing nutrition books or telling people what to eat. I’ll make exceptions when the advice is smart, funny or, naturally, when its something I agree with. In Wednesday’s Dining Times I read an article about Simon Doonan’s new book “Gay Men Don’t Get Fat”.  Immediately, the fact that Mr Doonan is the creative ambassador at Barneys went out the beautiful window, I was drawn in and laughing out loud.
Jeff Gordinier, the author states, “one of the tongue-in-cheek propositions of Mr. Doonan’s book is that the vast range of the world’s culinary options can be boiled down to two core categories: gay food and straight food.”
Some examples of gay food are:
Baby Arugula
Baked Chips
Sushi
Figs and Dates
Food that’s“lighter and brighter, it feels art-directed”
Straight Food:
Meat
Cheese
Stews
Fried Food
Mexican Food
Black Angus meatloaf on a menu is described as “the Burt Reynolds of foods.”
Lest you think gay food is healthy and straight food is not macarons, the French cookie, are gay. Mr. Doonan says, “I can’t believe any red-blooded straight guy can even walk into a macaron shop. If you want to ruin a politician’s career, just publish a picture of him shopping for macarons.”
When I finished the article I stopped for a moment and thought something I never have before…according to Simon Doonan’s criteria I may very well be a gay male or eat like one anyway. So if, as a straight woman, I identify more with gay male food, is the converse true too?  Nope, according to Mr Doonan, lesbian food is “earthy and healthful”. Examples are organic olive oil, thick porridge and heaping helpings of wheat germ. But in the Venn diagram of sexual orientation stereotypes and eating “whole grain bread is both ferociously lesbian and wildly heterosexual.”
While I contemplated arugula and googled Gay Men Don’t Get Fat I found all different theories on the subject, have fun and try to guess “the real reason gay men don’t get fat” according to Gawker. It’s much saucier than my one (grass-fed organic) beef with Mr Doonan. You see, Mr Doonan is anti-avocado. The distinction between straight female eating and gay male eating may be a lack of fat phobia among straight females. Or maybe avocados are “earthy and healthy” and a lesbian food. My friend, upon reading this article declared “I think I’m bisexual as I love sushi and Mexican.  So there are exceptions to every generalization.
As fate would have it at 2:16 yesterday, while I was writing this post, Barney’s sent an email informing me of a signing for Gay Men Don’t Get Fat tomorrow (Saturday) from 3-5pm at the New York Madison Avenue store.  I’ll be in Vermont eating what Doonan would call “hetero” food but maybe you can go.
Do you find poking fun at stereotypes offensive or fun? Is your eating gay or straight? Did you guess the real reason gay men don’t get fat without clicking on the link?