Lady Gaga's Weight Gain, More to it Than Lasagna

Lady Gaga has gained some weight. In a recent radio interview she estimated it was about 25 pounds. She didn’t have to comment on it but she did. She said her parents recently opened a restaurant and her father wants her to eat there. Gaga went on to say she loves pizza and pasta and every time she goes there she gains 5 pounds (what a plug for “Joanne Trattoria” which happens to be on the Upper West Side).  She has no issue with her fuller figure saying “I really don’t feel bad about it, not even for a second”. Sounds good right? She loves to eat, supports her parent’s business and isn’t bothered by putting on a few, or twenty-something, pounds.

Is this the same person who tweeted about doing back-to-back spin classes with hashtag #popsingersdonteat? In the radio segment she mentioned that she  constantly has to be on such a strict diet  and she’s trying to find some sort of balance. Let’s be clear, this isn’t the case of a celebrity gaining 3 pounds and media blowing it out of proportion. This weight gain seems to have happened in a couple of months (for the record Joanne’s has been opened for over a year), so it’s been quick, and strikes me as sad coming from the “born this way” singer whose lyrics advise us “just love yourself and you’re set.” 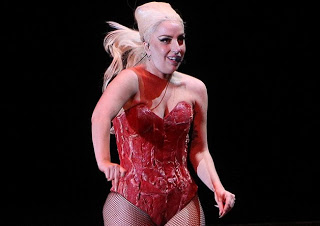 Gaga has been open about her love for booze and recently lit a joint on stage at a show in Amsterdam. She also has a history of bulimia. At a conference in California she opened up about this “I threw up all the time in high school. I wanted to be a skinny little ballerina but I was a voluptuous little Italian girl whose dad had meatballs on the table every night. I used to come home and say, ‘Dad, why do you always give us this food? I need to be thin.” So this struggle is not new.
Lady Gaga has started an anti-bullying foundation and my guess is that she wants to put a brave face forward about this. So although when I asked a friend about the food at Joanne’s and she said, “it’s not Foodtrainers-friendly” I wouldn’t chalk all of this up to calamari. I am a lady gaga fan, it’s ironic to think that someone who seemed the epitome of marching to the beat of her own drum (or piano) is a little beaten down by expectations when it comes to weight.
When celebrities open up about their weight does it invite more commentary? Do you buy Gaga’s explanation about her father’s restaurant? Do you think it strange that both as a child and adult she blames her dad for her weight?