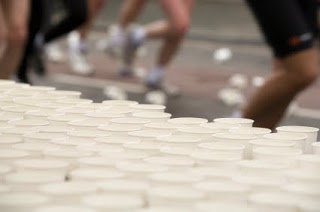 Foodtrainers’ 4 Fueling Facts will help you avoid miles of mistakes

I recently read an editor’s letter in Runner’s World where the editor, in training for the Richmond Marathon, committed to do everything right in his training this time, to do the things he always knew but rarely did. This rang a bell for me because much of what I tell Foodtrainers’ sports nutrition clients or what I write here isn’t new, exciting or unfamiliar. In fact, most of it you already know. So then, you may ask, why should you waste your time reading any further? And the answer is because this time I implore you to actually do it.

1. Heed the Holy Grail of marathoning. Let’s poll 10 marathoners and ask them what’s the worst thing they can do in terms of fueling, chances are most will probably recite “do not do anything during a race you haven’t done in practice.” Then, race day rolls around and there is someone handing out raisins or a new energy bar and many assume eating these un-practiced foods will be fine. I will let you know I was once guilty of this. I was running a marathon and was a little past the halfway point when I spotted a woman on the sideline. This smiling spectator was grasping a platter of orange wedges. I, who have M.S. and R.D. after my name, grabbed one orange wedge. I didn’t even finish eating it but tossed the remainder and continued running. And then I regretted it, I regretted it because I soon felt as if someone had sliced my stomach open. I was no longer worried about a PR or negative splits; I was worried my race was over. Is this meant to scare you? Yes, it is but you have a choice. You can follow the Holy Grail or blunt fact #1,

Eating anything untested may end your event, stick with what you know.

2. OK so maybe I scared you into shunning strange snacks but we’re not done. We need to talk water. Chances are you’ve been consuming more water as your training has progressed, you may own reusable water bottles or a fuel belt, and you think you’re all right in the hydration department. Well, here I am again the negative nutritionist about to dish up some more sad news. Most marathoners consume a fraction of the water their bodies need, particularly early in the race. Early in the race you don’t feel t thirsty and don’t want to be slowed down for fuel stations. However, you need to drink early and drink enough. How much? 12 to 30 ounces of fluid per hour (4 to 30 marathon Dixie cups) and slightly more if you sweat a ton.

3. Fueling fact #3 is to avoid TMI. And no, we’re not talking about too much information but rather the mistake many marathoners make, in an effort to ensure they eat enough, the mistake Deena Kastor made in Chicago earlier this month. This mistake is TOO MUCH INGESTED or even ingesting your tried and true pre-race meal too close to the starting time. This was Deena’s error, she was jet lagged and didn’t eat early enough. She then battled stomach cramps and needed to relieve herself during the race (OK, is this now too much information?). You can practice pit-stop prevention with this simple guideline:

For a full meal you need 3-4 hours to really digest things.

4. I recently attended a screening of a documentary about marathons. The film tracked the history of marathons and viewers saw what happened when marathons were run P.G. (pre Gatorade). What happened was that many elite runners became disoriented, some running the wrong direction, others were slowed to a walk and some fell down and were removed on stretchers. In marathoning terms, these runners “hit the wall” their fuel tank was depleted. These runners didn’t have Gatorade and Gus but you do. And 30-60 grams of carbs consumed (per hour) will help avoid doom.

I happened to be in a lecture yesterday and I was told to give people advice in “3’s” but I needed 4 fueling facts which I think you can remember. You have the running watch and the proper sneakers and you have trained hard. Don’t eat the orange slice, don’t wait until you feel thirsty, don’t eat too much or too close to the start and don’t hit the wall. Oh and do enjoy yourself because if you follow the facts above you really can enjoy yourself….if your shoes aren’t too new and you get a blister.