Me, meditation and a work in progress (without much progress) 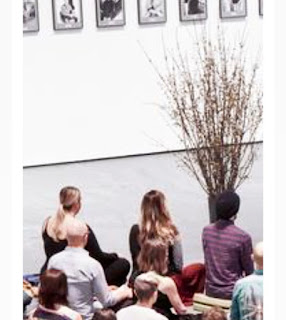 I know the benefits of meditation and I’m in awe of those of you with a regular “practice”.
I’ve investigated every form of meditation (or many). I went to a transcendental meditation info session but found it too cultish. I’ve done online courses but often look at how much time is left…I mean the computer is right there. Today, I attended a group meditation at MOMA, the Museum of Modern art.
My friend suggested the idea and the photos online showed people on cushions in front of beautiful artwork or gazing out at the sculpture garden. When I arrived at the museum, we were told to go “down two flights” which seemed odd. “I’m already claustrophobic” my friend told me. We followed the crowd to the theatre at the museum. It was dark, we were in seats, there was a photo of artwork called “Radius” on the stage’s screen. I was anti already. 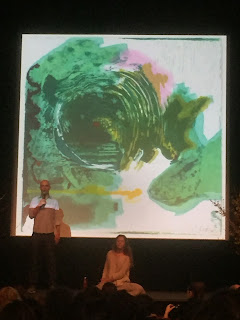 The founder of Flavorpill took the stage introduced our teacher (who had a cushion by the way). She told us close our eyes and place our hands in our laps. She didn’t tell everyone to silence their phones and so regularly there were beeps and gongs and all other annoying phone sounds. Next, she talked about belly breath. I still don’t think I’m 100% sure what belly breath is- deep breaths? My mind drifted off to dissecting what that term means. Then Amy, I think that was her name, explained how to count your breath and she suggested exhaling for longer than you inhale. That’s probably old news for those of you meditation pros but I found that helpful yet difficult.
I think teacher preference is personal. I decided midway through belly breathing that Amy was a little annoying or not inspirational enough although that probably stemmed from my frustration. I was frustrated that I was thinking about what to get my father in law for his birthday. I was frustrated that I was frustrated with the subway rumbling and the museum noise.
Before I paint a completely negative picture, there were a few glimmers of hope. First, some of the affirmations or concrete ideas resonated with me. “Think about the best version of today, or the best for you or your family.” And by the time Amy told us to open our eyes, after doing some weird rubbing our hands together and placing them over our eyes, I couldn’t believe a half hour had passed. I left the museum feeling more positive. I’m not sure if that’s because the sun was shining and I got a taxi OR if it was due to the meditation. I’m not done with meditation. I feel like the people who take 10 hours to finish a marathon. They still finish, right? As for my friend, I texted asking if she’d go again. “Probably not again for Moma or any meditation but glad I went and always great to see you”.