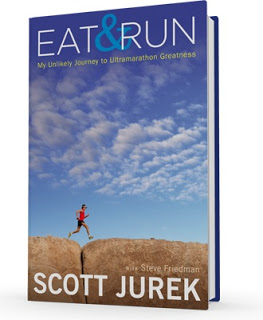 Last Tuesday, on the eve of National Running Day (I’ll admit this wasn’t marked on my calendar) Marc and I went to an event for the launch of Scott Jurek’s book Eat and Run. There was a five-mile run before the lecture that we opted out of. Many people did not and as we took our seats in the Society for Ethical Culture, I noted both the lack of air conditioning and the smell of runners. Somehow when you run the smell doesn’t bother you as much. I apologize to all the people I’ve shared subway cars with after races; I totally get it.
My main motivation in attending this talk was the “eating” portion of this book. Scott Jurek is an ultrmarathon champion and also vegan. Marc on the other hand loves hearing about any sports-related challenge. He enjoys Real Sports in HBO, watching the Kona Ironman and basically anything ESPN has to offer. The moderator of the talk was Christopher McDougall, the author of Born to Run. It was difficult to hear (or see) much that went on but I took note when Jurek spoke of running “for the love of it without the promise of reward.” For example, we were told a group of those attending ran 32 miles around the perimeter of Manhattan, the morning of the event, for fun.  I left intrigued with a copy of Eat and Run.
What the lecture lacked the book makes up for.  This isn’t just a book about a guy who runs long distances; it’s a great story. Jurek grew up with a mother with MS and a demanding, unsympathetic father. Sports were in many ways an escape and you see the roots of his mental toughness. Jurek describes the key to his success  “I had a talent for gaining speed when others gave ground, I realized that no matter how much something hurt, I could gut it out.” The book is filled with stories, advice and great quotes:
My favorite, which reminds me of fearless Jen,
Always do what you are afraid to do.
Bernard Shaw
The best dietary advice I found was Jurek’s thoughts on adopting a plant-based diet. “To my delight (and, I admit, surprise), subtracting some things from my diet actually allowed me to expand the number of foods I ate and to discover incredible and delicious new foods.”  Whether gluten free, vegan or raw, people fixate on living without certain things when the key is you can make food interesting from whatever your given choices.
Jurek’s most common pre-race food is almond butter on sprouted bread. I’m happy to say many Foodtrainers’ athletes also favor this (some choosing gluten free bread).  Jurek aims for 300 calories an hour during races but not just calories, good calories (I wish Runner’s World would take note). And there’s no mention of pasta parties and bagels. Jurek eats bean burritos, as I mentioned sprouted bread, quinoa and brown rice.
Jurek started out very much a carnivore but notes
The better I ate, the better I felt. Since going vegan, I had lost the layer of fat-the layer that came with eating the cookies and cakes and Twinkies and cheese pizza that so many omnivores and even vegetarians gulp down.
He mentions recovering better from workouts, increased energy and concentration improved. I think this is a testament not only to veganism but the power of nutrition for performance in sports and life.
I love the sound of this smoothie:
Green Power Drink
(2, 20-ounce servings)
2 bananas
1 cup frozen mango or pineapple chunks
4 cups water
2 teaspoons spirulina powder
1 teaspoon miso
Blend and drink 20-30 ounces 15-45 minutes before a run.
* I would suggest can also drink post run perhaps with vegan protein
Spirulina is an algae said to have been carried into battle by Aztec warriors, also a performance enhancer for long-distance runners, weight loss aid and immune booster. I like the pineapple here, contains a pain-relieving enzyme bromelin. The miso is interesting presumably used for its sodium content.
The only soy I recommend is fermented, as it’s generally easier to digest. Jurek points out something I didn’t know, that miso, tempeh and sprouted tofu also have less phytoestrogen content than other soy. These plant estrogens can function like estrogen.  In terms of new ingredients espoused in the book, I’m looking forward to experimenting with adzuki beans and epazote.
I love to run and eat well and Jurek articulates the joy that can come from each of these pursuits.  More than anything though, I was left with realizing that the greatest tool we all possess isn’t physical strength or a Vitamix (and you know I love my Vitamix).  It’s our inner dialogue and knowing that you can get a second, third or fourth “wind” if you’re willing to gut it out.
We focus on something external to motivate us, but we need to remember that it’s the process of reaching for that prize, not the prize itself-that can bring us peace and joy.
Do you run? Have you ever contemplated an ultramarathon? Do you eat soy? What is it that you are afraid to do?