Nike plus sized mannequin for the right reasons? 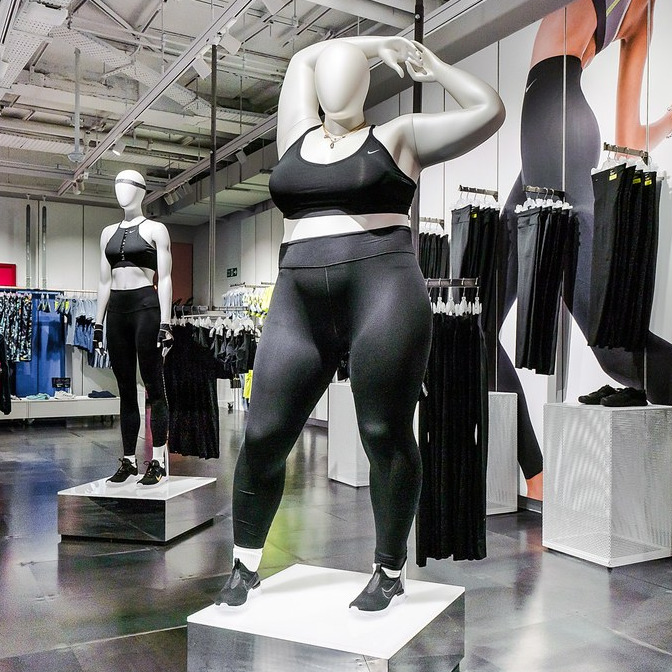 At first, I saw images of Nike’s plus sized mannequins on my social media feed. I didn’t know why I was seeing the same image over and over. Wednesday, I was sent a link to the controversy surrounding them. To fill you in, Nike unveiled new mannequins at one of their London stores, who happen to be plus sized. It seems the mannequin is a much-needed step toward promoting fitness at any size. Who could object to anything that decreases barriers to exercise? Well, a writer for the Telegraph objected or wanted the attention from objecting in such an offensive manner.

The article, which I refuse to link to, made statements to the effect of this mannequin, if a person in real life, was likely pre diabetic and would need a hip replacement. Aside from these being ignorant and gross comments, if someone was having blood sugar control issues (at any size), why wouldn’t you want to inspire them to move more?

I checked and Nike does offer plus sized fitness clothing. The cynical side of me suspected that Nike  had hoped to gain financially from this move. To my knowledge the mannequin was unveiled at 1 store worldwide. However, based on their record as a company, I’ll give Nike the benefit of the doubt and hope that there are ore to come.

The Telegraph piece isn’t even worthy of debate. It’s really the equivalent of someone railing against women, minorities or anyone less represented being given a boost. At Foodtrainers, we don’t roll in the mud with pigs, that’s what you are if you write something like that.

There are so many obstacles to being healthy and so many ways to feel left out of the health and wellness conversation. Well done Nike, let’s see those mannequins widely used. I, for one, would be thrilled for them to replace the emaciated ones, across the board. If we’re honest, the “plus sized” mannequin is just a real woman in workout clothes. The fact that it’s such a big deal shows we have a ways to go.

What do you think of these mannequins? I can’t see any legit issues but would love to hear from you.