No Such Thing as a Free Food Sample 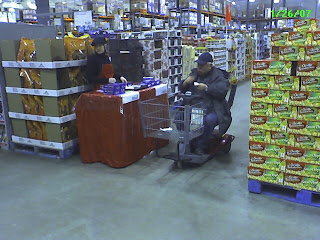 Photo by Colin Rose
On Wednesday mornings I go to yoga. The way my schedule works, I have 45 minutes between dropping my kids at school and the class I take. My little ritual involves stopping at Cosi for a mint tea and then curling up with my kindle in the “cozy” pillow/couch area at yoga. Last week, as I took my place on line at Cosi I heard something that made me shudder. “Would you like a free bagel with that?” the counter person queried. “Um, sure” businessman replied. It was the next customer’s turn “would you like a free bagel?” Latte woman, with a fruit cup, said, “no, I shouldn’t…but ok, yes.” I felt bitterness building inside me where mint tea was meant to be.  When I was up to the “perilous plate” I was asked the question of the day. “No! I don’t want a bagel, that’s mean of you to ask,” I said seemingly lighthearted. “Actually, can I have a free apple instead?” “Nope, just bagels today we’re promoting our new squagel.”  I headed to yoga, indignation ignited, thinking about those innocent people manipulated into consuming over 300 calories and 61 grams of carbohydrate.
On one hand, you can’t fault stores and restaurants for offering samples. It’s actually smart marketing. I showed up to ski recently and found out it was “demo day”.  After testing out a few pair, I ended up with spanking new Dynastars that I love but hadn’t even contemplated earlier. At food clubs there are the “demo dollies” offering samples. Research has shown that 7 out of 10 shoppers say they occasionally or usually buy a product they sample. After years of watching sample whores (term not mine, there are Facebook groups devoted to them though), I think the estimate above is a little high but sampling, for owners, does have its payoff. Looking at the photo above, is there not something amiss about enticing people with free, often unhealthy, food? It may not be a business’ responsibility to look out for the health of their patrons but they also don’t need to pour salt in our wounds (literally).
I know many people have a hard time turning their back on perceived “savings.” Yet processed food isn’t really saving you anything. It stimulates your appetite, entices you spend more and at some point you will probably have to “pay” for poor eating. I can hear you now, how is a couple of bites doing any harm? Nonsense, one can easily down over 900 calories while shopping. I credit another dietitian for doing the math. Another thing to think about and hopefully deter you is the chance of food borne illness in those innocent-seeming bites. Many foods are left out for long periods of time. Not too long ago, there was an E coli outbreak traced to cheese samples at a major food retailer.
My advice is don’t sample anything you wouldn’t buy if you had to pay. Also, predetermine what you will order at a restaurant or what you will buy at a store (using a list) to avoid impulse decisions free and otherwise.  Cosi, which does have fantastic salads (and great tea), says in its squagel promotional materials “in case you need another reason to try a squagel now try one free.” In that example, “free” is the reason or “tipping point”. Let’s erase free as the sway vote. After all “there’s no such thing as a free lunch” or free squagel.
Are you enticed by food when it’s free? Would you describe yourself as a sample whore…or reformed whore?  Isn’t the concept of a squagel (square bagel) a little silly?


**Congratulations to Carrie the winner of our Food Should Taste Good giveaway.