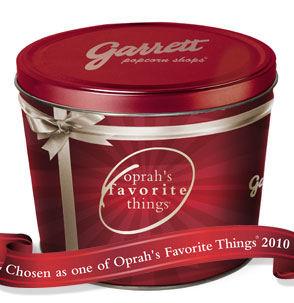 When Oprah talks people listen. They have listened for a quarter of a century. Oprah can make books bestsellers, can create careers for the experts she features and pretty much has the Midas marketing touch. The New York Times recently described people clamoring for the few unbooked spots on her show this season, her final “Farewell Season”. I am an Oprah fan; my DVR is crowded with the shows I record daily. Any viewer can sense the ante has been upped this year. Audience members are going to Australia and driving home Volkswagens. Even celebrities seem to be stopping by for one last chance to talk to O and promote their work. Yet in all of this excitement, something we expect from Oprah has been disregarded. It seems Oprah has already said farewell to health.
Over the years, we’re watched Oprah run a marathon, venture into veganism and get into a whole lot oh hot water when she questioned the safety of our beef. Viewers have related to Oprah because despite the chef and the trainer when it came to weight and food, Oprah was one of us. Oprah can go camping on her show but who really thinks she is doing that when the cameras aren’t rolling? And while I loved my first Jetta (and was sad when I crashed it), I don’t think O is driving one.  Weight and food is different, Oprah’s weight fluctuates and so we really feel she means what she’s saying when she talks about it.
Last week Oprah’s favorite things aired. Unfortunately this is product placement at its best. For companies and audience members this was the final and “ultimate” favorite things and the gifts were major. There were diamonds and I pads, cashmere and cruises and there was food…if you would call it that. Oprah, with millions or billions watching, eagerly praised pails of popcorn, she commended croissants and mentioned to moms that this certain mac and cheese was the perfect family dinner on a busy night.  While I am all for the special splurge, I felt I was watching an opportunity pass. Oprah could have thrown in her favorite fruit delivery, post workout snack, she could have said something to the effect of  “we all know you can’t eat mac and cheese every day” nothing.
Everyone is entitled to a mistake; even Oprah isn’t perfect. I kept my DVR taping and continued to loyally watch O’s shows.  Yesterday, Oprah hosted Nicole Kidman and her country music husband Keith Urban. It wasn’t the best show. It was a little bit of a mish mosh as Oprah was really talking up her upcoming Australia visit.  Oprah chatted with Keith about rehab, to Nicole about motherhood (let’s not forget “Nic” has 2 teenage children, she was a mother before Sunday Rose), she gave away one last ticket on the Australia trip and then it happened.
Oprah was talking about the great food in Sydney and she selected the apex of Aussie cuisine none other than… McDonalds. Yes, in an embarrassing nod to one of her Sydney sponsors she presented Australia’s Mc Donalds as different from the United States versions. They then cued waiters to bring her audience McDonalds wraps and smoothies (I wrote about these smoothies in case you’re curious). Plus, there’s more! Every person on the Australia trip got a gift card. God forbid Americans leave their fast food habits at home; they can now eat McDonalds for free down under. Oprah took a bite of her wrap and it was all I could do not to cry on my comforter.
The season isn’t over. I’m holding out hope that Michael Pollan will come back or maybe Dr Weil.  Oprah always seems to have a soft spot for kids perhaps Jamie Oliver will be on pushing parents to cook more. Hey, I’m not too shabby. I can put on a pretty dress and tell Oprah about my favorite food and fitness finds too.  I just hope Oprah doesn’t forget about the other “O” in this country obesity and that she hasn’t said farewell to health.
Did you watch either of these shows? Do you O has missed the boat or am I overreacting? Who would you like to see Oprah have on to redirect this junk food train?