Most people watching yesterday’s final round of the British Open were likely focused on who would win the Claret Jug (or is it mug). I watched, and although it was as exciting as golf can be, I wasn’t fixated on the jug/mug. Two topics were more interesting to me. The first was that these athletes breaking records and duking it out were both in their forties. And second, Phil trimmed down. 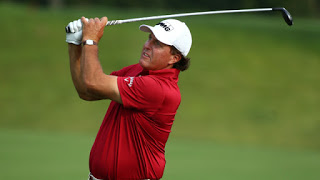 It turns out Phil has gone Paleo and upped his fitness game and, as a result, he’s dropped 25-ish pounds (over 2 stones). I’m not sure that Phil got the idea from Lebron. It’s not as though Lebron started the paleo diet but of course “Phil lost weight following the Lebron diet” was a headline I came across more than once. Lebron was hardcore paleo for 67 days. This means their diets consisted of fruit, vegetables, protein, nuts and limited carbs (no dairy, no grains/gluten/sugar).
For me, it’s one thing for average people to pursue paleo but quite a shift from old-school “carbing up” for athletes to do it. A part of paleo I wholeheartedly endorse is the concern with better-sourced ingredients (grass-fed meat, wild fish etc.). I’m off to the beach in 10 days so I’ll give Mickelson credit and say I’ll be loosely following the Phil Plan.
Do you watch golf (it’s ok to admit it)? Did you notice Phil looked more fit? What do you think of paleo?