Relax, it's not really even a soda ban.

In case you haven’t heard, Mayor Bloomberg has proposed what some are referring to as a soda ban in NYC.  Bloomberg has suggested that movie theaters, restaurants, stadiums and food carts limit soda size to 16 ounces. Bodegas and markets will continue to sell sodas of all sizes. While it’s hard to believe that 16 ounces (over a can’s worth) of soda is limiting even more alarming to me is the degree of pushback this is receiving. Our government has decided BPAs are safe, it permits food dyes banned in other countries and has yet to notify the public when our food is genetically modified. So when someone takes food seriously and tries to enact positive change, I’m going to support it.
A little background, half the US population over two years old consumes sugary drinks daily and these beverages account for approximately 8% of our calorie intake. The average male teen gets close to 20 teaspoons a day from soda. We would find it strange if you ordered wine in a restaurant and the waiter poured the whole bottle into your glass but this 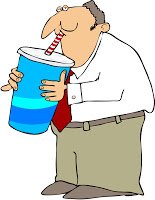 is totally acceptable. We’ve learned from Brian Wasink’s research that intake is highly dependent on the size of the food presented. Of course the Beverage Association sees no problem with soda and had this to say, “It’s time for serious health professionals to move on and seek solutions that are going to actually curb obesity. These zealous proposals just distract from the hard work that needs to be done on this front.”
Nice attempt at passing the buck, this sounds like my children arguing,  “I didn’t do it, he did it”.  I’m a serious expert, or at least an expert, who would love to get more involved as would many of my collegagues. I’ve written about soda and sugar extensively. How about they make smallersize their nasty (told you I wasn’t “serious”) sodas and experts can educate and discuss why this and other ways to limit sugar is important. Obesity and simply better health needs everyone’s cooperation. Speaking of which, the first National Soda Summit, organized by the Center for Science in the Public Interest is being held in DC next week, if you’re looking to learn more that sounds like a good start.
Aside from the beverage industry, there’s also the nanny state objection-that government shouldn’t tell us what to eat.  I’m sorry to say but they already are (see image above for a little refresher) and that’s why sodas are the size of a bottle of Clorox bleach and for many people fresh vegetables are unaffordable. The Atlantic, in an especially whiny piece, suggested that the focus should be on access to healthy food versus banning. How about both? Measures should be taken to increase access to wholesome food and decrease the size of sodas, nobody is taking soda away. The truth is, the power of the soda people may thwart Bloomberg’s plans to have the Department of Health pass this. Talk about politics, if I’m choosing a “nanny” I would take Bloomberg over the Beverage Association any day. And if you think we, as a country, don’t need a nanny- what do you propose?
Are you in favor of or against Bloomberg’s proposal? Do you think it will pass?