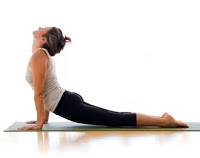 It was the perfect summer day. It wasn’t too hot or too humid. My husband, partially because he is a nice guy and mostly because he knows I am an abnormally tolerant golf widow, had the kids plus a friend at Rye Playland. I was alone in the city and the possibilities were endless. I went for a run, bathed and showered (because I could), made myself lunch and headed back outside. I was annoyingly content and the ideal target for what was to happen next. I walked down Amsterdam Avenue and noticed a sign in front of the membership office for the new yoga place that was opening. I went inside to find out more about the studio so I could tell my clients about it. In less than 10 minutes, I left with a membership to Pure Yoga that would not open officially until December. “But you don’t do yoga” nice husband remarked when returning from his exhausting play date. “I know” I admitted “but I’m going to start.”

Months later and many degrees colder I went to Pure Yoga for the first time. In class, I introduced myself to the teacher, told him I was new to yoga and set my mat up in what initially was the back of the room. It wasn’t long before I was annoyed. I didn’t know what was happening or what “dog” was what. Seemingly, everyone else did. I was craning my neck to see what was happening and deciding I hated yoga. To make matters worse, about 15 minutes into class the back of the room became the front and I was now annoyed, hating yoga and embarrassed…not exactly my idea of the path to peace. After 90! (note to self yoga is too time consuming) minutes class ended. So what did I do after such a letdown of a first class? I went to another class later that week of course. I found that I knew more what to expect and that I that upward dog looked more like a lizard and downward dog was where I could take a breath or two. I still wasn’t convinced.

I decided to shift gears and try a Hot Yoga class. I am one of those people who likes to sweat and wanted to branch out before I threw in the eucalyptus scented towel. This room was smaller and darker. The teacher wasn’t overly yogi and played really good music and the class was 60 minutes. I thought this maybe was the right yoga for me. I took a couple more of these classes with the same teacher but things weren’t clicking for me with yoga. I told my sister in law, who was also a sucker (I mean excited) for the early membership deal, that I wasn’t getting a good workout and wasn’t loving yoga. I even went so far as to email management to cancel my membership. “You can’t cancel you know we signed up for a year, you’re locked in until December.” I had a feeling she was right or at least had read her membership contract. Now what to do?

Around the time I realized I had 11 months left on my 1 year sentence to yoga, I received an email. The email was from one of the instructors reminding me of my complimentary private yoga session (also in the contract). I made an appointment with YogaMatt (that’s his email address clever, right?). I joked with Matt about how I’m exactly the wrong type of person for yoga (high stress, intense, type A) and he said “no you’re probably someone who can benefit most.” Interesting. After a couple more yoga classes I started to realize something else. Every time the teacher offered a modification to make things a little more difficult, I ignored it. My goal was to avoid embarrassment and I was mostly successful. However, I soon realized I was going through the motions and that didn’t feel very good. Scott the Hot Yoga teacher even said in class that when you aren’t doing things to your fullest potential you become diseased (I don’t recall the exact words). I had a choice; I either had to jump in and potentially humiliate myself or become diseased. What would you choose?

I have 18 yoga classes under my belt. My goal is to go at least twice a week though I’m sure more is recommended. I know that bind doesn’t mean when you can’t go to the bathroom and that “wrapping it up” doesn’t refer to a present. At times I surprise myself with an improvement and at every class I feel I am incapable of many contortions others have mastered. My friend Wendy said it took her a year to feel she was getting things with yoga…so by the end of my sentence I hope to feel that way too. As adults we have the choice to quit things whenever we want. This was a good lesson in not judging or quitting too quickly. I get the sense there are more lessons to come.
Do you do yoga? Any advice for me? Anything you’re tempted to quit? Do you think it’s good to know what’s not for you or should we, as we tell our kids, stick things out?