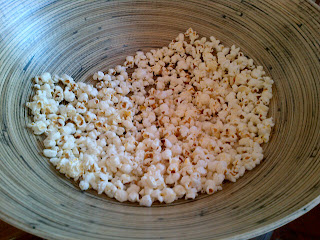 When we woke up yesterday it was 1 degree out here in Vermont. I did what any reasonable parent would do and sent my kids out to ski anyway. They had lots of layers and hand warmers. As selfish as I am, the guilt got the better of me and after I logged six miles on the “dreadmill” (not my term but so good) with no TV to distract me, turns out it was too cold for the satellite to work, they came home. We also had houseguests up and we prepared for a day with lots of cooking, fire tending, football and the Golden Globes.
For football snacks, I made a big bowl of popcorn with truffle salt (recipe below) that dwindled quickly. I also tweaked Ina Garten’s Baked Fontina and served it with endive and celery to “lighten” it. We held our breath as the Giants played the Packers and eased our nerves with a bottle of organic Syrah and Peak Organic pale ale. We all cheered as the Giants took the lead and continued to extend it. It was such a good reminder that reputation doesn’t always matter and that if you come ready to play, anyone can win. The Giants did convincingly.
While awards were handed out at the Golden Globes, there weren’t a lot of winning looks as far as our jury of nine, kids and adults, concluded. There is so much that’s said about weight and dieting but at the end of the day it isn’t size that matters. I don’t know if it’s a trend but the bed head hair made many stars look unkempt. There was also this prostitute-like makeup look with very dark eyeliner and bright lips that in high definition looked a little scary (the previously primped Clare Danes comes to mind). Then there’s the issue of age appropriate. I am no longer 20 and should not dress or ask my dermatologist to make me look as though I am. We age and with that there has to be acceptance and some wardrobe considerations. My friend’s husband woke up this morning saying he had nightmares about Jessica Lange’s backless dress.  Maybe she didn’t expect to win and have to stand up but she did, not good.  There were highlights, Octavia Spencer from the Help looked lovely in lilac, Natalie Portman elegant as always and Sophia Vergara showed you can tone it down when necessary. She was pretty and polished.

So while we all spend tons of energy getting in shape, at the end of the day a hairbrush and a good tailor may be just as important. Oh and I am sending Angelina my cast iron pan with baked fontina.

Truffle Popcorn
Heat 1.5 Tbs coconut oil (or other oil) and ¼ cup organic popcorn covered over medium to medium high heat for 3 ½ minutes. Give the pot a shake a few times to avoid burning or sticking. Transfer to a bowl large enough to toss. Add 1 tsp. additional coconut oil or butter and ¼ tsp truffle salt or more to taste. Makes 8 to 10 cups.
How was your Sunday? What are some of your favorite cold weather munchies? Did you watch the Globes? Any catty comments? What do you think about people with unlimited “help” looking scary?