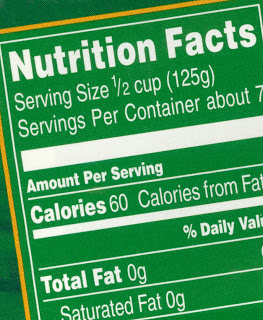 On Tuesday I was contacted by Good Morning American to tape a segment on serving sizes. I shuffled my afternoon calendar and made my way over to Fairway Market to meet their crew. The news of the day involved a request by CSPI (often referred to as the food police) asking the FDA to revise serving sizes on certain food labels. I was interviewed in various aisles and went back to my office.  I watched the show the next morning and later contacted the producer; I thought I had missed the nutrition segment. She apologized to me and explained the story “had been bumped for the peacock.” The peacock being the one who had escaped from the Central Park Zoo. Serving sizes would wait another day.
The segment did air yesterday but my gripping comments about soup and cooking spray were cut to about the length of time the label suggest you spray (or a ¼ second) so I’ll fill you in. CSPI feels that the labels for certain foods such as the aforementioned canned soup, cooking spray as well as ice cream and coffee creamer (not a particularly healthful foursome) underestimate the actual amount of these foods consumers use. It’s hard to argue that one-cup of soup, an actual cup not a restaurant mug is pretty teensy and measuring ¼ second as aerosol oil sprays  suggest on the label is silly. I mean, “one-Mi” if we’re using the exact science of Mississippi counting.  So yes, the labels have their faults but perhaps consumers of canned soup, ice cream, spray oil and coffee creamer have bigger fish to fry.
While the serving size may be a little off, all labels list “servings per container.” So to determine just how much of a sodium bomb your Chicken Noodle soup is you need to multiply the serving by a factor of 2 or 2.5. Are we unsure consumers can do this?  CSPI is worried about people with hypertension, I am too. Should people who care about their blood pressure be eating canned soup? Or, are they reassured by the 790 milligrams if they eat the suggested 1-cup serving? I am all for pointing out confusing and misleading food packages but don’t see this as all that misleading.
CSPI suggests “the FDA should define serving sizes to reflect what consumers actually eat.” To me that’s opening up an extra large can of worms. With that reasoning is a serving size of frozen pizza one pie? A pint of ice cream? A liter of soda? CSPI found on a phone survey that most Americans do not consume 1 cup of soup, can we use what people actually eat to formulate guidelines? I don’t think so.
Food companies know what’s going on. Chips would be less attractive if calories per bag were listed. “One hundred calories per serving” sounds much better, too bad if there are 25 servings in the bag. So there’s a little fudging in on the part of the companies but who are we kidding when we down the bag of chips? So while I know most people don’t have a “teacup” of cold cereal, if you eat fewer packaged foods you’re in a better place for a host of reasons.  And in case you are more interested in the peacock story, here it is.
Do you think serving sizes are “misleading”? Do you think they should, as CSPI requested, reflect what consumers actually eat? Do you eat any of the four foods mentioned?