US Open your mouth

In NYC, there are 2 telltale signs summer is drawing to a close. One is the sudden dearth of available taxis and the other is the US Open tennis tournament. Yesterday, on Labor Day (the real scrooge of holidays after which there is said to be no more white and shortly light) my family drove out to Queens for a day at the Open. I hadn’t really been in Queens since the Sahara-like half marathon so I was excited to return for a day with more moderate temperatures and activity.

Let’s just say I wasn’t the only fan who was as interested in the food as I was in the tennis. The food at the Open has come a long way. This isn’t the land of hot dogs and hamburgers stands anymore. There is a large food court area with options ranging from sushi and edamame to soft fish tacos. The pizza and pasta section offered salads with grilled chicken or shrimp and there was even Niman Ranch sausage (not low cal but at least no fillers) at the BBQ kiosk. So there is an impressive array of sound, though pricey, food options…but that doesn’t mean people are gravitating toward them.

I had seen a stat that over 115,000 hamburgers had been sold as of Sunday at the Open. And the line at Classic Burger, offering a “1/2 pound burger” or ½ pound chicken sandwich was clearly the longest. I even asked my favorite research scientists (AKA my children) to walk up and down 2 aisles of tables and “spy” what people were eating. Their report was succinct “hamburgers, burritos, fries, popcorn and Gatorade.” Having, patrolled the aisles myself, I would have to agree with their observations.

While most patrons would know that their hamburger wasn’t necessarily the healthiest choice, I think the beverage calories are a little more sneaky. Every vendor offered Snapple, Gatorade and Evian. Sixteen ounces (and I believe the Open’s beverages are 24 ounces) of Snapple or Gatorade can run you up to 200 calories, for Snapple 184 of these calories are from sugar. A couple of these in a day can really add up not to mention the calories in the Cosmos and other drinks offered. *For full disclosure, I’ll admit my research scientists did share a Snapple Peach Iced tea with their sushi, edamame and pasta. 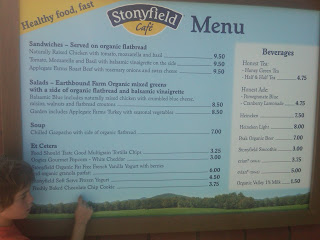 I have to say that my Foodtrainers’ favorite food moment of the day happened right after we left the tournament. Stonyfield, who had a café in the food court, was stationed yards away from the tournament exit. They were giving out their vanilla yogurt (4 ounce size). I grabbed 2 yogurts for my kids and started walking. At some point I looked back, my 6 year old was lagging behind. As far as I could see was a swarm of people, young and old, some in yarmulkes others in baseball caps all clutching their yogurt and mini spoons. As I started to get emotional from the extent of health eating around me, we took the staircase down to the parking lot. Under the staircase you could see a heap of empty yogurts. Rather than finding a trash can, people had tossed their trash on their way out. Oh well, it is NYC.
Have you been to the Open this year? What did you eat? What do you think it says that the healthy options weren’t the most popular? And finally, for extra credit, what’s with tennis scoring? My son asked why it was love, 15, 30, 40 and I had no answer, help!