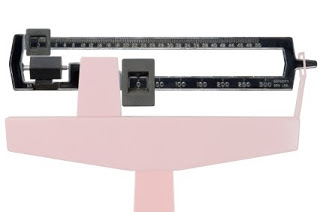 My office isn’t large. On one wall are two chairs for clients with a window in between them. My chair and a small table for my computer sit opposite. On one of the two remaining walls hangs my favorite painting and against the other rests my healthometer “doctors”scale. I’m a nutritionist and having a scaleis pretty much a prerequisite but I can sense the stress creates, the metal elephant in the room. I remember when I was first counseling, I had an office in one of the Manhattan gyms. They had a scale, much like my healthometer, in the locker rooms. On a daily basis members would come to the front desk complaining the scale was wrong. It may have been slightly off but it wasn’t broken. Finally, a sign was posted above the scale simply stating “it’s not the scale.” Harsh but true.

I weigh most of my clients backward, with them facing away from the scale’s numbers. I do this because clients are fully dressed (though some slightly disrobe) and come at various times of day. I tell them if they’re up or down and approximately how much. I do this to avoid the number game and yet even without a number of pounds the scale can affect our behavior. There was a Cathy cartoon that comes to mind. In this cartoon Cathy gets on a scale and proclaims “I didn’t lose weight I may as well eat more.” In the next frame she gets on the scale again and says “ooh I lost weight, now I can really eat more.” Many clients, though fully dressed, take every last piece of jewelry off. One client insisted I deduct from her weight because she was in blue jeans. I told her it doesn’t matter that much. She weighed her jeans when she got home and called me “they are 1 pound heavier than my pants.”

While this all seems silly, the scale seems to be an important tool for weight loss and weight maintenance. The National Weight Control Registry , which tracks the habits of people who have successfully lost and maintained 30 pounds or more, shows that 75% of their maintainers weigh themselves at least once a week. I have a nutrition colleague who has also lost a good amount of weight who has been known to travel with her scale. She finds it keeps her in check to weigh herself daily. Others feel the scale makes them crazy and instead judge by how their clothes fit. My worry with this is that for clothes to feel different we’re talking close to 5 pounds lost or gained. As for me, I weigh myself post-poop and pre-dressing when I remember. Hey, if Oprah can talk about poop on a vegan diet I can talk about it with the scale. And in case you’re wondering (I know you are) poop tends to weigh between 6 and 8 ounces. And no I didn’t weigh any poop to find that out.

How often do you weigh yourself? Can you remember what you weighed at various times in your life? Any amusing scale stories? Please weigh in.