What I Wish LeAnn Rimes Would Say

I first remember seeing LeAnn Rimes accepting an award for her rendition of Blue. She was 13 or 14 and wearing a white strapless dress. She looked so young, had yet to be made over and still had that “baby” fat I see in my photos from that age. Only I wasn’t getting up on any stage and only my family saw the pictures. Well that was a long time ago. Leann has grown up. She was married, had a well-publicized affair, divorced her first husband and remarried. She’s also lost a ton of weight.
Unlike many shrinking celebrities. LeAnn has been quick to defend herself.  She’s also fueled the fire a bit posting photos of herself in teeny bikinis via Twitter. I read a brief Q and A with her. I do not know which magazine it was but it was one of the “manicurial” titles even I will not pay money for. It may have been Life and Style. In this article LeAnn first said something to the effect of “I eat but I eat very cleanly”. She went on to say she at mostly protein and vegetables. Try a couple of days on fish, egg whites and greens and let me know if you feel this is “eating.” 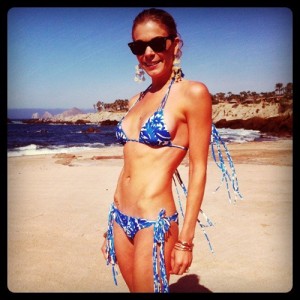 There was also the requisite quote from LeAnn’s trainer.  He came to her defense (after all we know where his paycheck comes from) and said she was healthy and worked hard in the gym. I was about to dismiss this as the typical celebrity cover up for diets gone too far ala’ Nicole Richie or Calista Flockhart.  I then read something else. LeAnn said that people criticized her for being chubby all her life. She said now they’re criticizing her for being too thin.  It sounded honest.
LeAnn has responded to people’s tweets about her body.  Granted her replies have been defensive “they’re called abs not bones” was one I read. LeAnn also tweets a fair amount about food. I wish, perhaps naively, that Leann could say something to the effect of “I’ve always felt pressure to slim down and have finally done so” and “I may have gone a little far.” I’m not sure Leann realizes the last part yet.  Previously, LeAnn Rimes has not really been a role model in many peoples’ eyes but I think she has an opportunity here.
Do you think LeAnn should respond to people’s comments about her weight? What do you think she could say that is honest? Do you think it’s good that she now feels good about her body (as she’s said) or is that just sad?