What Jean-Georges says to do with leftover herbs 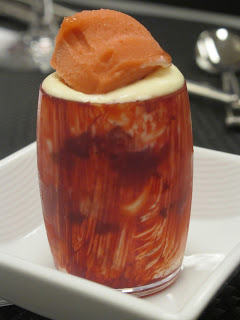 Whenever a new calendar comes in the mail for cooking classes or lectures, I scan the roster and purchase tickets for the events that stand out. A few months ago, I noticed that Jean-Georges (Vongerichten), master chef and owner of some of my favorite restaurants, was to teach a class with his son Cedric (of Perry Street), his wife and cooking show host Marja and Cedric’s wife Ochi.  Upon closer inspection I saw the class was being held on June 13, my wedding anniversary. Marc loves Asian cuisine; Vong, Jean-Georges’ Thai restaurant, was one of his favorites before it closed. So even though a cooking class wouldn’t be part of Marc’s dream evening, he was game. He was game until we realized our boys had their “playoff” hockey game the same time as the class. Marc looked at me somewhat concerned and said “I can’t miss the game.” “Of course you can’t miss the game,” I said knowing Marc would choose sports and the boys over any meal, no matter how delicious. And so I spent my fourteenth wedding anniversary with my mother and Jean-Georges.
We arrived almost an hour early for the class to sign in. You’re called in the order you sign in and we didn’t want to be stuck in the back. I guess I forgot I live in a city where people camp out for Shakespeare in the Park tickets and risk losing their jobs to sign up for Soul Cycle. We were 47th on the list and were told people came to sign up at 10am (the list was put out at noon). So you’ll understand the heads in many of my photos.
Aside from one of the best meals of my life, it was a pleasure to see this family in the kitchen together. At the end of the day, fame aside, cooking with your family members and sharing food is fun. 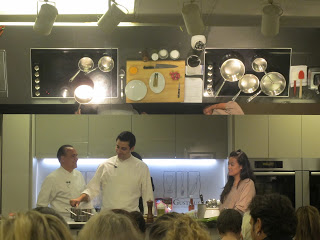 The ingredient of the evening was chili peppers. Here is Jean-George modeling finger chilies. His beautiful and feisty wife Marja arrived for the evening in flats but changed into killer heels. She only cooks in heels.  I loved her before even before I tasted her kimchi fried rice. 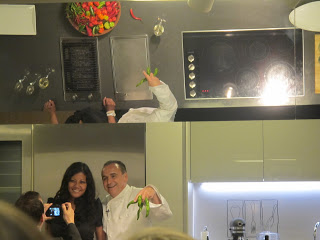 As Cedric and Ochi prepared the Peekytoe Crab dumplings, Jean-Georges delivered a life-changing tip. If you’re like me you buy fresh herbs for an individual recipe. I get thyme for lemon chicken and fresh cilantro for salmon burgers. Inevitably, the leftover herbs sit in the fridge which is really an herbal hospice and eventually they are tossed. There’s a solution. Take the herbs and layer them on a paper towel on a plate. Microwave (yes, Jean-Georges microwaves) them for 2 minutes. When you’re done, viola- dried herbs you can save, blend with salt or sugar.  I had some sage that was passed its prime and put the micro-dry system to the test. I may have stunk up the kitchen (and perhaps dispelled bad energy via sage burning) but I how have sage for meatloaf in my cute little Veev jar. 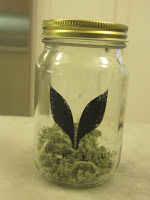 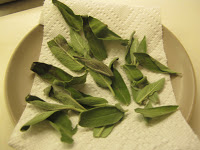 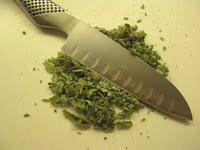 Dessert (pictured above)  was a Strawberry Tiramisu
made with Chili-Strawberry Sorbet.
It was a fantastic evening and when I checked by Blackberry, I found out that the boys had won their game. Even though I didn’t spend the evening with my husband, he said “your mom probably got more out of it than I would” and he may be right, I spent the night with 2 dynamic couples. In 14 years I’ve come to realize marriage is about sharing and laughing and also maintaining your interests and honoring your partner’s as well.
Have you been to a Jean-Georges restaurant or used his cookbooks? Do you cook with chili peppers? Are you going to micro-dry?
More photos of the class on their site here