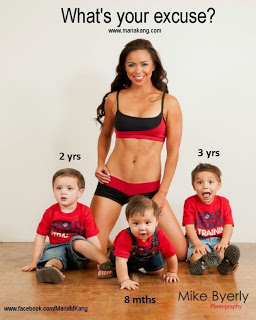 The photo above made its virtual rounds a month or two ago. I thought about blogging about it but didn’t. There was a part of me didn’t feel Maria Kang needed more attention. Then this weekend I received this from a reader.
Hi Lauren – hope you had an amazing Thanksgiving! After a day (ok 2 days) of indulgences, I stumbled across this story in the Daily News. It’s definitely a touchy subject but I actually don’t disagree with the woman who originally posted “what’s your excuse”.  I hear a lot of excuses from friends and family about why they can’t eat healthy, can’t find time to exercise and after a certain point, it annoys me. A lot. Then guilt kicks in because I feel I’m being judgmental. It’s complicated, but I do believe it’s not difficult to make small changes that make a big difference! I find the whole thing rather interesting and thought it would be nice to hear your opinion a la blog post.
So here it goes. This woman, Maria Kang, has three young children and looks great. What she doesn’t look is relatable and the whole photo and tagline makes her seem like the mean girl. Her shtick, if you will, is shock. When I was choosing an author photo for the back of my book my publicist said, “if you are attractive and telling others what to eat you better be smiling and sound approachable or you’ll turn people off.” If “What’s your excuse” had a photo of a make-up less mom cooking a healthy dinner with kids carrying on OR had (as in the Nike ad) someone exerting themselves or showing their commitment, it would be different. However, when “what’s your excuse” has a nearly-naked gorgeous young mom, with three cute kids there’s no way I’m feeling inspired, I’m not calling myself on my excuses, instead I’m feeling defensive and angry.
When I heard Maria Kang interviewed she explained a rigorous routine and a difficult back-story. If it were just about the story, I know women would be curious. So this comes down to a matter of messaging. If you want to motivate friends or family members, as the reader above mentioned or simply are seeking motivation yourself, we need to check negativity, shame and our personal habits at the door. You cannot motivate others by saying “look what I do”.
I’ve talked about the importance of positivity and compassion before.
Some other ingredients for behavior change:
Accountability and support: In one Stanford study 1 phone call every 3 weeks resulted in 78% more exercise. Goal setting also helps; Carolyn enlisted me for the Runner’s WorldHoliday Running streak
after first checking to find out if this appealed to me which is key.
Sorting out “why” also matters. We don’t exercise or loose weight “because we should” we have to figure out what’s the reward or connection for each of us. One person’s skinny jeans s another person’s avoiding medication. Sure enough, in a study where women wrote down the things that were important to them they tended to eating less of the tempting but unhealthful foods that were offered in the lab after the exercise than those who did not. After two and a half months, they also weighed less, and had smaller waistlines than the other participants. The difference in the groups applied to both those with normal weight and those who were overweight.
We’re all tempted to judge and label, I know I’ve had moments of that on this blog and many more in real life. It’s OK for the reader and all of us to get judgy or annoyed when others don’t take care of themselves but if our goal is to help them the key is making it about them and keeping it kind. Nothing Maria Kang has said is designed to help others. “I want this to happen for you” or “we all make excuses” would’ve  been completely different. As for walking around in a sports bra…I have many excuses why I will never don the one black boob, one red if Maria wants to hear.
What motivates you to make health-related changes? Can you think of a person, ad or event that gave you a positive nudge? What do you think of what’s your excuse?”