When Barbie’s body is on the cover of Time magazine 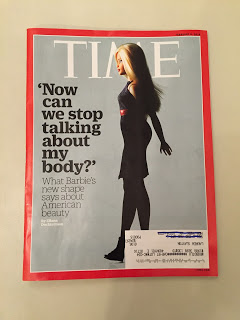 Off the bat, I’ll say I wasn’t a doll girl growing up. I did have a Cabbage Patch but that was more of a stuffed animal and 80s status symbol (among the 4th graders). I spent time with Speak & Math the way some of my friends played dolls. I recall some limited Barbie play at two friend’s houses but I was much more interested in Barbie’s dream house. So, I don’t have any sentimental connection to the iconic doll. 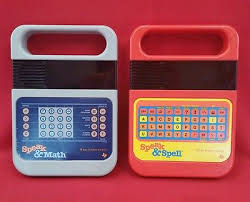 If you haven’t heard, there are three new Barbies on the block. They’re all named Barbie but there are petite, curvy and tall versions. There are new skin tones and hair colors and textures as well. Mattel, who makes Barbie, says they hope the new dolls will be a reflection of the young owner’s world. They also hope to save Barbie from decreasing sales.
Barbie is on the cover of Time this week. The Time article mentions Kim Kardashian, Beyoncé and Lena Dunham as examples of changing beauty ideals and thus the need for newly shaped Barbies. I could be wrong but I wouldn’t peg Lena the Barbie-playing type. No matter what the body type, the message is still it’s all about Barbie’s body. It’s superficial and judgmental to say “curvy is the new thin”. 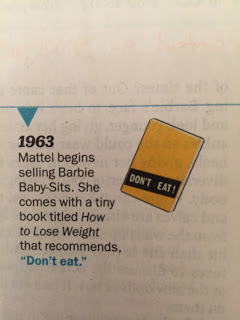 If we trace Barbie’s roots, her body is based on a German doll called Lilli. Lilli was a “prostitute gag gift handed out at bachelor parties.” I am not sure how the doll made the leap from hooker to toy aisle but we can’t blame Barbie for that.  Barbie has quite a checkered past, there was a teen Barbie grasping a diet book with the advice “don’t eat”. I can only imagine what the parents, who send Mattel’s COO death treats, would have to say about eating disorder Barbie.
I’m not entirely convinced that a doll’s body affects what young girls think about their bodies. After all, I felt no surge in desire to have the Cabbage Patch body. Time references a 2006 study and reports “girls exposed to Barbie at a young age expressed greater concern with being thin.” I looked at this study and this wasn’t necessarily conducted on Barbie lovers, rather girls were shown images of various dolls. So I don’t know if Barbie is harmful.
And who am I to pass judgment on Barbie or parents who are up in arms about Barbie’s body? Look what’s going on in my house. 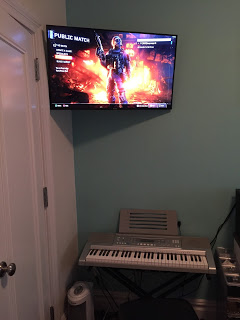 What do you think of the new Barbies? Is this an indicator of inclusivity or a marketing ploy? Do you think Barbie affects the way young girls (or boys) think about their bodies?
*And the winner of our Four Sigma giveaway is Erica Sara.