When healthy eating is no longer healthy 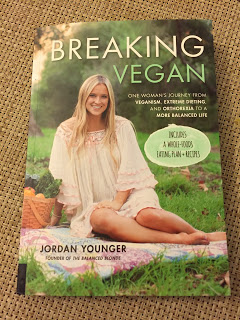 Perhaps you’ve heard of Jordan Younger, she’s a blogger known as “The Balanced Blonde” (formerly known as the Blonde Vegan). Jordan built a massive following when she turned vegan and detailed her vegan creations on her blog. She made national headlines when she made the decision to shift from veganism (zero animal products) to incorporate fish and eggs in her diet. If you are puzzled why that’s national news, it wasn’t because the vegan community berated her for defecting (she claims to have received death threats). Rather, Jordan’s story brought an eating disorder called orthorexia into the spotlight.
Orthorexia, and this is my definition not any official one, is when the focus on healthy eating becomes obsessive. This obsession can have deleterious health consequences.  We’re hearing more about orthorexia, a client sent this Refinery29 story to me. The author writes:
Health was an easy way to hide my eating disorder because it was so culturally on-trend. Weight obsession seemed vain, but my addiction to green juice, superfoods and all things gluten-free made me feel like a member at an exclusive club.
A question, posed on Foodtrainers’ Facebook page, asked where the line is when healthy eating becomes disordered?  I would say it’s when healthy eating dominates your thoughts and begins to affect relationships, work or other responsibilities, and your health. Are you fearful of social gatherings or plans that involve food? Does this make you turn them down? Are you constantly tired? Missing periods?  And as much as orthorexia is defined as a disordered focus on health, let’s be clear there is almost always a weight component.
I purchased Jordan’s book Breaking Vegan. It’s certainly a cautionary tale that explicitly depicts the progression of an eating disorder. It’s brave to tell this story in such detail. However, in the same chapters where Jordan writes of having no color in her face, purging and “starvation methods” she was selling cleanses and advising others how to cleanse. I was horrified as I read this. If we give Jordan the benefit of the doubt, one could say she didn’t know the depths of her disorder at the time. How about her recently released book? I can’t comprehend how someone with such a tenuous relationship with food can highlight “eating plan and recipes” on her book cover.  I’m not sure she should be in the healthy food business in the same way a gambling addict probably shouldn’t work in a casino.
As you read the book (I read ¾ of it), you see that Jordan’s unraveling was complicated. Part of her spiral had to do with the eating disorder and the other part was substituting virtual attention and relationships for real ones. As Jordan’s health slipped she was boosted by online attention and praise. I’m so happy her relationship with food and health has improved. Anyone who turns his or her life around deserves praise. But, as nutrition professional, I do worry where we get our food advice. I also worry that Internet fame and all its trappings might be the next disorder.
Had you heard about this story? Do you think many people have “orthorexic” tendencies? Do you think someone in the depths of an eating disorder should dole out dietary advice?