When it comes to wellness, can we all lighten up? 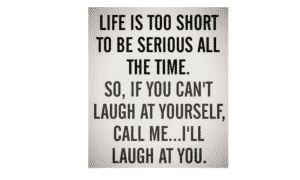 As you might have gathered, from yesterday’s TV post, I’m not that deep. I should clarify, I’m not outwardly deep or woo woo. Most inspirational quotes, not all, get an inner or actual eye roll from me. My preferred method of communication is humor. I have learned, from this blog, my book and social media that not everyone appreciates this. 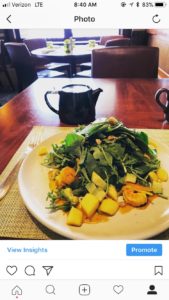 I’ll give you an example. Last week, I was away skiing. One day, when I was away “skiing” but not skiing, I posted about my lunch. It was a very exciting salad and tea photo. In my comments, I mentioned that the man next to me ordered “more coke”. I admitted, I was being judgy. Yesterday, over a week later, someone messaged me. “Respectfully, why the comment about the man ordering a Coke. It gives the impression that being healthy is akin to being better than people who are judged to be unhealthy, or who order Cokes.”

I try to respond to all non-batshit-crazy people on social. Although my first instinct was to say Seriously? You’re going back in my posts in order to call me out?

Instead, I said, “I hear soda, I think ew. I shared that. It was more a joke than about feeling superior. I’m just as likely to point out when I make a shitty choice. I think we have to have a sense of humor about wellness or it really becomes dreadful.”

This is where the love-your-selfers lose me. Can we be more honest and less holier-than-thou (I’m loving hyphens today)? A salad is superior to a Coke. I’m willing to bet that Mr Coke, in Jackson Hole, would agree with me. From the look he gave me, I’m guessing he felt,poor woman, she’s having this plate of lettuce while I have a delicious burger, fries and soda. As for Ms Respectfully, she said, “got it. I guess I missed the humor part. Thanks.” And yes, now I’m judging her.
As I mentioned, I dig honesty. Do you feel I was acting superior or making a joke?How would you have responded to Ms “Respectfully”?