Why Men Want Women to Eat Mac and Cheese 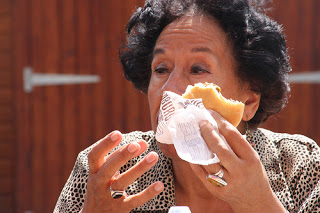 photo by Simon Mark Smith
Recently I applauded Kim Cattrall’s admission that she watches what she eats as a refreshing departure from teeny celebrities professing their love for burgers and big portions. And then yesterday I got a kick out of an article in the New York Times “ For Actresses, Is Big Appetite Part of the Show?“ on this exact subject.” In this article experts debate the reasons why actresses profess their love of fattening food and why we all want to read about it. It was noted that these declarations appear most often in men’s magazines. Padma Lakshmi, the host of Top Chef, went on to describe women eating a lot as a male fantasy after which the author wrote “two things we need to survive in life are food and sex or love. Food for our bodies, and love for our hearts. So what is better than the archetypical image of a woman eating succulent, dripping, greasy, comforting food?”

OK so let’s forget the words succulent, dripping and greasy (ew). The question I have is: do men find women eating a lot sexy or appealing? My first thought is that men, and by that I mean the stereotypical man who reads these male magazines, wouldn’t find it as sexy if the woman doing the eating was larger or older (see photo for confirmation). This is so hard to say in any remotely politically correct manner but the burger or rib eater’s perceived sexiness most likely determines that degree to which her hefty eating is sexy.

But aside from the idea of women’s eating as sexy or a fantasy, do men like their women to eat a lot? I wonder if you polled 100 men if they would prefer their partners to eat
a) a burger and fries
b) a burger
c) a salad
d) nothing-
what the majority would say.  As a serious salad eater, it elicits surprise from my husband when I veer from my normal course. And yet I don’t sense any outpouring of desire when my food choices are “greasy.” I can, however, appreciate a good scotch (just one) and love to watch sports and I have a sense that my husband likes these less prissy qualities.  So maybe I’m wrong.  Maybe my salad eating is the equivalent of his toothpaste residue in the sink- something that’s not ideal but not worth making a fuss over.
And what about the converse, what do women like their men to eat (which just came out so wrong)?  It would make some sense that females who eat healthy fare would like their men to also but I think there’s a fine line here. We want our men, at least I do, to be able to eat healthy food but we don’t want them ordering “dressing on the side.” Amenable but not high maintenance, that sounds about right.
Slender women chowing down (as if they do it daily) is no different from the super skinny woman with giant boobs or the actress shown waking up in the morning perfectly made up and coiffed. There’s something a little hard to believe about each of these examples. The irony is that hot-to-trot Kim Cattrall, was the most honest about all of this and who’s sexier that she is?
Does your partners food choices turn you on or off? Do you think a woman eating unhealthy food is sexy to men? What would you do (ladies) if your husband ordered “dressing on the side?”