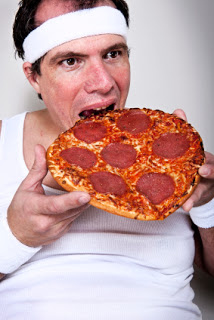 It seems rather intuitive that cranking up your exercise helps you lose weight.  After all, if you’re burning more calories and eating the same way that would be the case. The problem that exists, that I refer to as “marathon syndrome” is that for some people feel they deserve a reward for their exercise efforts and that reward is often edible. When I look at food journals, for clients training for a marathon, the day of their long run is usually when I see the pancakes or cookies. And in case you’re tempted to explain this based on appetite, the same workout rewards have been observed with lighter workouts.
The May issue of the Nutrition Action Healthletter, interviews one of my nutrition heroes Dr Brian Wansink. Wansink wrote the book “Mindless Eating” and this interview focused on cues that affect our eating. My post on the connection between color and appetite was an example of one of these cues. Regarding exercise, Wansink summarized an experiment conducted with participants on a retreat. Before dinner, the group was divided in two. One group was told they were headed on a scenic walk around a lake. The other group was told they were going on an exercise walk. Both walks were easy and paced similarly. When they returned and had dinner the “exercise” group ate more. They also estimated they had burned more calories.
Another study, with postmenopausal women, divided participants up in groups and prescribed varying amounts of weight loss. Women doing the most exercise did not lose the most weight. There was more food compensation in this group than the low or medium exercise group.  An association was seen between increased exercise and increased “rewards”.
In some cases it’s not even the exercise but thinking about exercise that can trigger reward behavior On her blog Herbal Water, Dr Ayala discussed a recent study in the journal Appetite.  Participants read a passage about a 30-minute fun walk or a 30-minute exercise walk (not unlike the Wansink experiment). After reading, those who had read the passage and answered questions were presented with snacks and candy. They were allowed to scoop as much as they wanted into bags to take home. Those who had read about exercise scooped 52 percent more.
If you’re exercising to release stress or for your health, this sense of entitlement may not be a problem. However, if you’re interested in losing weight because Memorial Day is about three weeks away that’s another story. I work with clients on their self-talk. If we can see fitness, leanness or slimming down as the “prize” sometimes we can skip the post-workout pancakes. Another tool is to pre-plan food on more intense workout days to avoid impulsive decisions.  It also should be pointed out that there’s nothing wrong with having a treat as long as it isn’t presented as a workout reward. Love handles aren’t that rewarding.
Do you find yourself feeling exercise entitled? Do you eat differently on workout days? Why do you think there’s this “I ran so therefore I eat” connection?
Speaking of rewards (ha) the winner of our Sweet Riot giveaway is EA The Spicy RD.