Would you Like a Side of Kale With That? 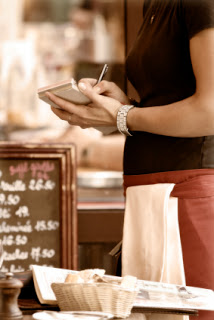 On more than one occasion, my husband and I have found ourselves watching a show that airs on ABC Friday nights called “What Would You Do?” Using actors, actresses and hidden cameras the show sets up certain scenes: someone banging another person’s car or a woman breast feeding at a restaurant or a parent harshly scolding a child and tapes how strangers respond. It’s fun to see who speaks their mind or sticks up to someone and of course how people feel when they find out that the scene wasn’t real. This past Friday’s show placed an overweight woman at a restaurant ordering large amounts of unhealthy fare. The actor-waiter was scripted to inform her it was “a lot of food” or suggest healthier alternatives.  His suggestions were presented with varying degrees of malice.
Some fellow patrons stuck up for the woman telling the waiter he was “rude” or that it wasn’t his business (my husband pointed out that much of the outrage came from equally overweight customers). Others, though in the minority, felt the waiter was trying to be helpful. While watching the show, I was filled with “can you imagine if this actually happened?” but I feel differently after mulling this over. I’m wondering if there isn’t a tactful way to do this.  If we could eliminate the meanness, is there a way a waiter could steer people in a healthy direction much like a register person asks if you want fries with your order or a server reveals his favorite items on a menu? This is all unlikely because restaurants have a financial interest in us eating more and not less and generally do not have our health or weight in mind but it could be interesting. I’ve had servers, especially when dining in a group, say “I think you have enough food ordered” which never seems to offend.
And then I started to think that a waiter’s comments might not be that different from calorie counts on menus. Whether we want to know or not, we now see just how many calories that Starbucks scone has (440). Do people feel this is rude or that it’s a not restaurants’ place to tell us this? No, for the most part, buzz kill aside, people feel it’s good information to have. So when it comes to observing a hit and run, I might not speak up if the person seemed scary. With breastfeeding in public, booby covered I’m fine. And if a waiter suggested I add a side of kale to my dinner, I might have to kiss him. If I did, “what would my husband do”?
Do you think it’s a waiter’s place to steer customers in a healthy direction? Do you like or dislike calorie counts on menus? And do you think we actually know what we would do until we’re in the situation?