You want an airline ticket? Step on the scale. 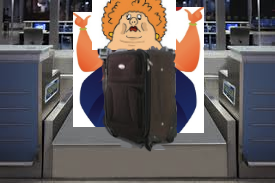 When I go to the store and buy wild salmon, the fishmonger weighs the salmon and affixes a price tag based on how much I buy. The same per pound system goes for apples, potatoes and nuts from the bulk bins. I’m not thrilled about it but when traveling, our ginormous black wedding registry (pre bags on scales) bags get weighed as well and this often results in a surcharge. However, if I want salmon and produce and travel, the scale is a prerequisite. Samoa Airlines is taking this one step further. What’s used for Tumi and tangerines is also used for people of all sizes; they’ve started charging based on weight. Passengers weight + baggage weight = price.
There’s a silver lining if you look for one. Kids would be less. Instead of a 2 year old being charged the same as a 200-pound adult male, they would benefit from being smaller and lighter (as long as they don’t charge based on noise level or decibels). And hey, if you’re dropping weight for a beach vacation, you now have a financial incentive. Weigh less pay less? I’m not sure if this would impact initial efforts to lose weight just for the sake of airfare.
In Samoa’s defense, Samoans are large- often the largest people on earth and this airline, to date, flies small planes. Cargo weight does matter. Military planes take weight into consideration. But most people aren’t Samoan, soldiers or excited for public weighing. Not that we’re happy about whipping out the credit card because you happen to have heavy ski boots (or more likely too many shoes with you). I don’t like removing my shoes for the security like but I do it, but that’s for “security” is getting on the scale the same?
This may work for a small airline. I get their stance that planes fly based on “cargo” weight not based on seats. I get that people are getting larger. But what happens when someone gets to the airport and cannot afford their ticket based on their size? Would companies pick smaller employees to do more travel if it saves them money? Would people be willing to do this hopping on the scale pre-flight?
Lots of questions and for now mostly hypothetical but interesting. It doesn’t seem right  nor does the person seated in front of me reclining in my lap or breaching their armrest boarder. On our recent trip, a child in front of us was using an ipad. The parents hadn’t contemplated the mute button or headphones. I politely asked them to lower it. You know what happened? The kid freaked out. I’m not sure telling a person “politely” to pay triple for their ticket would have a better outcome.
What do you think? Is this, as the head of Samoan airlines said “the future”? Can you see this working? What are the advantages or disadvantages?